Melbourne transforms into a city with a vibrant culture of walking, cycling, scooting and skateboarding for 8 to 80 year olds and the infrastructure investment and community awareness campaigns is considered an essential activity for a growing city. 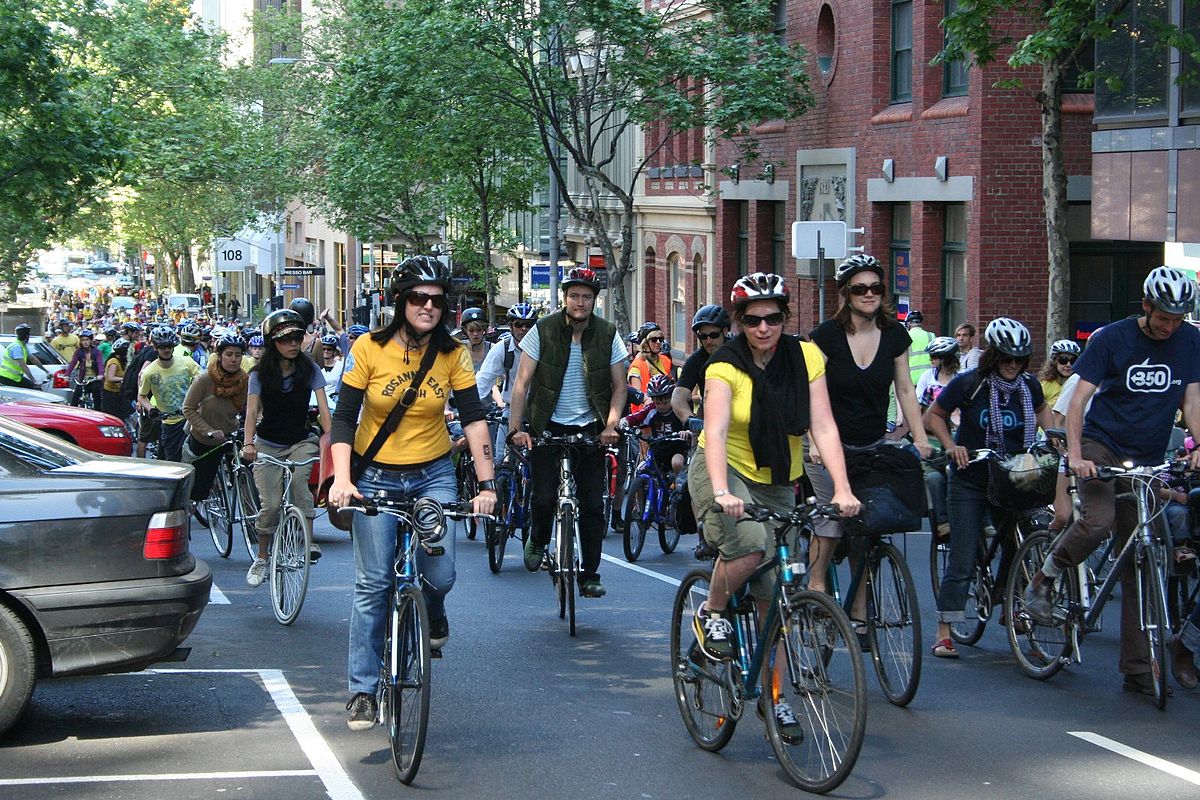 Victoria is a leader in recognising cycling, one form of active travel. It all started with the Geelong Bicycle strategy 1976 which became a forerunner to Bike plans across the world. In 1994 The State Bicycle Strategy, “Victoria for Bikes” recognised cycling as a legitimate form of transport and the need to recognise bicycle planning in the State Transport System. There has been several campaigns to get people active and take advantage of Melbourne especially relating to children walking (VicHealth’s Walk to school) and cycling to school (Ride2School) as well as Ride to Work Day held annually that have increased participation. Schools participating in programs such as Bicycle Network’s Ride2School have more than double the national average of school students incorporating exercise into their daily commute. The program shows schools how to encourage, empower and enable students to get physically active on their journey to school. There are large discrepancies between inner Melbourne and outer Melbourne in relation to infrastructure that enables people to choose active travel as the preferred option, increasing Melbournians reliance on less healthy transport options. Melbourne has some great organisations and institutions doing vital work including local governments, Good Cycles, schools and workplaces We want to acknowledge the good work going on and build on this good will to elevate the profile of active transport and have the infrastructure to support it being the fastest, cheap and best way to get around Melbourne.

Melbourne is on the way to becoming a great city for active travel. Here’s what needs to happen:

Communities that participate in healthy modes of transport and active travel are contributing to environmental sustainability, social cohesion, decreased traffic congestion and improving the liveability of our city.

The direct gross cost of physical inactivity to the Australian health budget in 2006/07 was $1.49 billion, equating to nearly $200 per inactive person per year. Not only does having a more active population have a positive impact on our health budget but also there are many personal health benefits include improved mental wellbeing, reduced heart and respiratory disease to longer life expectancy. There is a risk of injury when participating in any physical activity however the consensus is that the positive health benefits outweigh the risk of potential injury from healthy modes of transport.

In recent decades substantial changes in Australian lifestyles, urban environments and  transportation systems has led to increasingly sedentary lifestyles and changes to physical activity patterns among children. Active transport, in particular, has declined dramatically in countries such as the US, UK and Australia,  where car travel has become the predominant form of travel (Salmon et al 2005; van der  Ploeg et al 2008).

Physically active children are healthier, happier and more socially connected than children who have more sedentary lifestyles (US Department of Health and Human  Services 2008; WHO 2008) and are more likely to  be active adults, resulting in health benefits across their life course (Trost et al 2002; Kjonniksen et al  2008).

Additional social benefits of increased active transport and reduced motor vehicle use include:

RACV’s car running costs report estimates that it costs between $52 - $87 per week to own and run a car representing a significant financial investment, especially if a household runs multiple vehicles. The costs to the public purse of road infrastructure including bridges, tunnels, flyovers and ongoing maintenance is a significant ongoing direct cost to governments as well as hidden costs of health due to inactivity and air pollution.

Commit to supporting the fantastic local plans and strategies, and local government initiatives with budget commitment from government and strategic integrated implementation plans.