An open letter to GHD Engineers 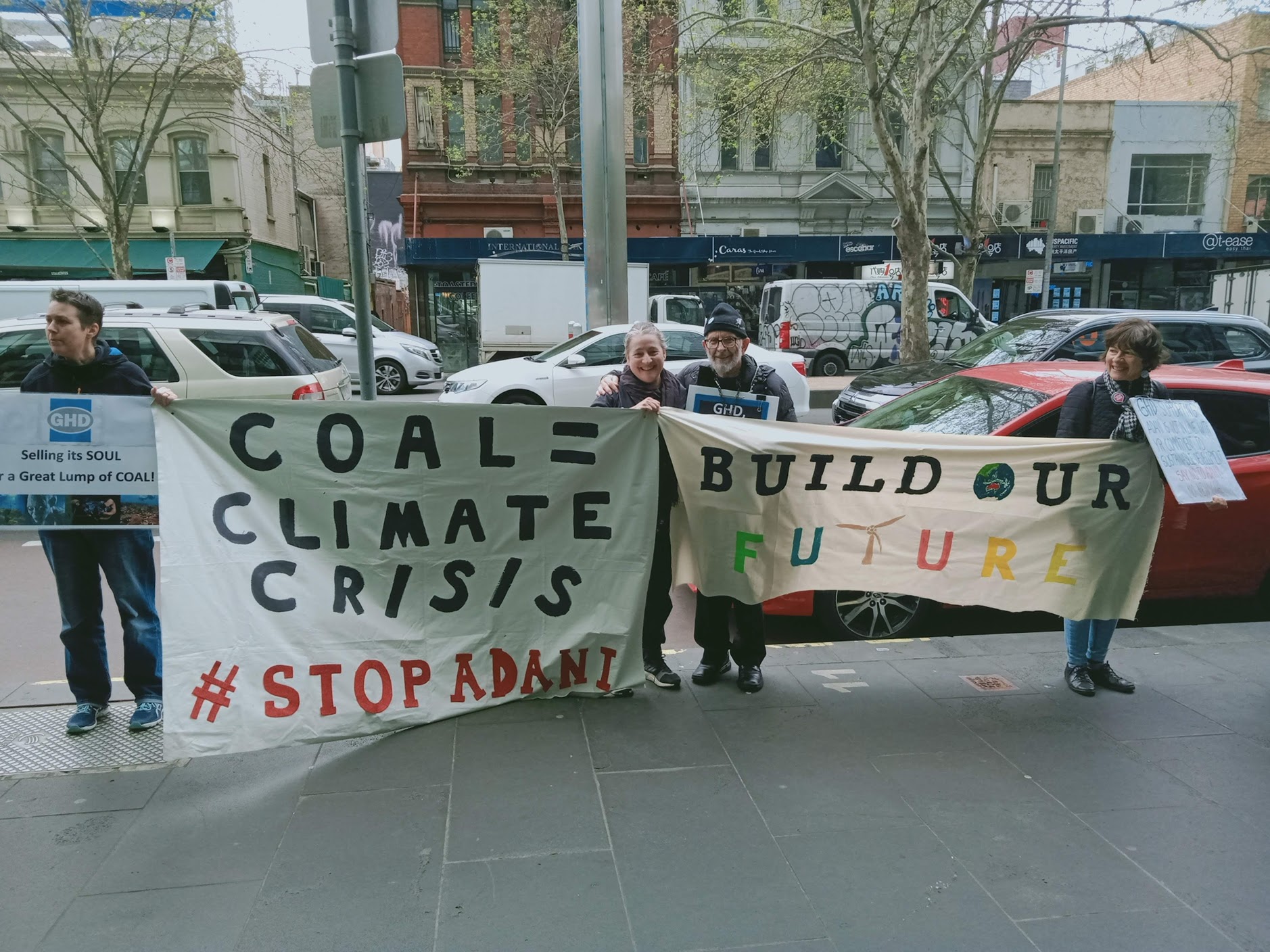 We requested that the company stop working on deplorable projects such as Adani's rail line and mega toll roads and we asked them to work in line with their own sustainability principles.

Read the speech below! 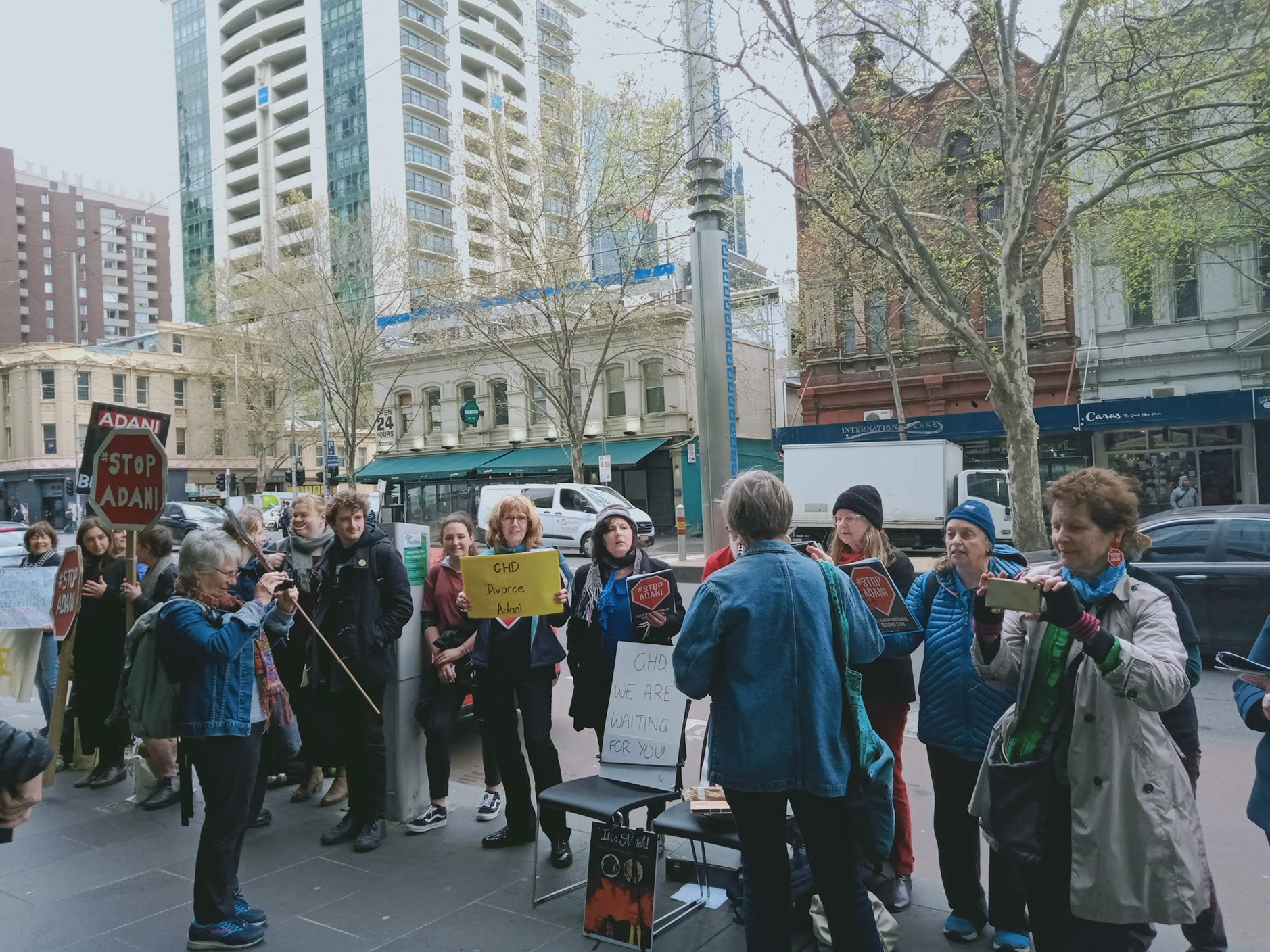 "Before I begin, I’d like to acknowledge the land on which we meet today. The unceded land of the Boon Wurrung and Woi Wurrung people of the Kulin Nation. I pay my respects to their elders, past, present and emerging and extend that respect to any Indigenous people here today. I recognise the integral role that First Nations people play in the fight for climate justice. They have been protecting country for thousands of years, and non-Indigenous folks have a lot to learn from them.

Sustainable Cities is a campaign that works towards improving public transport and stopping new toll roads. GHD is a company who is currently working with Adani and who has worked on designing major toll roads in Victoria such as the North East Link. GHD claims to have sustainability as one of their main values, however their projects say otherwise. There are so many sustainable projects that GHD could be working on, some of which I will go into further. So on behalf of Sustainable Cities, I call on GHD to work in accordance with their values, and to stop working on fossil fuel projects including the Adani mine.

Sustainable Cities is a grassroots campaign that raises up the voices of locals who are pushing back against new major toll roads such as the North East Link. We’re also campaigning for an integrated transport plan to ensure that everyone has the ability to move around in a reliable, affordable and sustainable way. So we’re aiming to get rail projects like Melbourne Metro 2, Doncaster Rail and the Suburban Rail loop built as soon as possible.

To GHD, I ask you: did you see the millions of people from all around the world take to the streets in the last couple of weeks? Did you hear the young people begging for a safe climate future? You have the power to be on the right side of history and be a part of ensuring a safe climate for all.

In your sustainability principles you state that you recognise your responsibility to make your operations sustainable for the generations who follow. You say that sustainable solutions and innovation are at the core of what you do, and how you operate. How can you claim this, when you’re in bed with Adani, a company who is notorious for burning dirty brown coal, leaving communities exposed to harmful levels of pollution, and who is about to open up the Galilee Basin. If the Basin is opened up it will be the biggest coal mine of it’s kind in the southern hemisphere, producing 4 times as much carbon as the rest of Australia each year.

In your sustainability principles, you state that “A sustainable world depends on physical and social infrastructure that advances economic opportunity, protects our environment and improves people’s lives.” So I ask you, why are you contributing to projects such as the Adani coal mine and the North East Link toll road. Both of these projects will lock us in to a future of carbon pollution that is already displacing millions of people and causing extreme weather events. We only have 18 months to stop a catastrophic chain reaction that will speed up the effects of climate change and make most of planet earth uninhabitable. Climate change will be completely out of human control.

We know that you work with clients across the world who are at the forefront of renewable energy development in solar, wind, and battery storage. And we commend you for that. But your work in renewables doesn’t offset your work with the corrupt multinational conglomerate Adani.

GHD, you are a leader in smart engineering. Why not put your skills to good use and commit to sustainable infrastructure projects? You could begin right here in Victoria. Melbourne urgently needs more public transport such as Melbourne Metro 2, Doncaster Rail and the Suburban Rail Loop.

Melbourne Metro 2 involves building a tunnel between Newport and Clifton Hill via Fishermans Bend, Southern Cross, Flagstaff, Parkville and Fitzroy. It would respond to the needs of people in the west, the north and the north-east. It would free up capacity on existing lines and produce long-called for extensions to the rail network such as to Doncaster and Epping North. This project will positively impact future generations and contribute to transport justice throughout Melbourne. It will support Melbourne’s growing population and take polluting cars off roads.

Another urgently needed infrastructure project is Doncaster Rail. This would connect to Melbourne Metro 2 and run down the Eastern Freeway, all the way to Doncaster. Plans for Doncaster rail have been on the table since 1969 and it’s been campaigned for by community members for decades. Doncaster Rail is vital for people living in North East. Manningham, the municipality in which Doncaster is situated, is the only district in metro Melbourne without a rail OR tram line. Everyone deserves to have the choice of a public transport option.

In June of this year, the Suburban Rail Loop went to market for expressions of interest. The Suburban Rail Loop is a proposed new underground rail link connecting Melbourne’s middle suburbs. It will include new stations and connect all major rail lines from the Frankston line to the Werribee line via Melbourne Airport, enabling more efficient transit options. This major project will transform the way many people travel around Melbourne and take 200,000 cars off major roads. This will significantly reduce carbon emissions, as train travel is much less carbon intensive than car travel.

So GHD, I repeat, we are in the middle of a climate crisis. Which side of history do you want to be on? You preach sustainability and wanting to ensure a positive future for generations to come. It’s not too late. You have the opportunity to put your skills to good use and commit to sustainable projects. On behalf of Sustainable Cities, I call on you to work in accordance with your own sustainability principles. I call on you to commit to no new deals with Adani. I call on you to say no to all new fossil fuel projects from now. And I call on you to create a transition plan for your clients to move away from fossil fuels. As I’ve outlined, there are many engineering projects that will have a positive outcome and reduce the effects of climate change. We need you to take the lead and become the climate champion we know you can be."